PASADENA-Researchers at the California Institute of Technology have developed a device for sorting individual living cells. This device will provide huge cost benefits for scientists and technologists in clinical medicine as well as in biological and materials research.

According to Stephen Quake, an applied physicist at Caltech and a member of the team that developed the cell sorter, the new device will be significantly cheaper than those now on the market. Cell sorters currently available cost hundreds of thousands of dollars.

"Hopefully, this will make it easier for everyone to have a cell sorter on their bench," says Quake.

Researchers use cell sorters to collect for further study individual cells and single-celled organisms with certain characteristics. The process of looking at and identifying cells one at a time in a rapid fashion is known as "flow cytometry."

In the November issue of the journal Nature Biotechnology, the Caltech team describes their success in separating individual E. coli bacteria with the new device. Not only were the researchers able to sort out the bacteria that were producing a green fluorescent protein, but they were also able to recover sorted bacteria that were still alive and viable."Bacteria are hard to do with conventional cell sorters because they're so small," Quake says. "Up to the present, we've done E. coli, but we think you could do pretty much anything that can be fluorescently labeled."Mycometrix, a Silicon Valley-based company, has licensed the cell sorter and anticipates that it will cost about $25,000, according to company CEO Gajus Worthington.

Optical image showing bead sorting in action. A red bead is being sorted to the collection channel.

"We believe the cell sorter technology can also rapidly identify pathogens in food, water, and human tissue samples," Worthington says.The cell sorter consists of two components-a rubber chip and a reader. The clear chip, which is about an inch square, has three wells linked by a T-shaped channel network. A quantity of biological material is placed in the bottom well, and the individual cells of the material move up the channel by capillary action.

When the cell reaches the junction of the T, the reader shines a laser that causes thecell to fluoresce, thereby providing information on its individual characteristics. The fluorescence is collected by a microscope objective and converted to an electrical signal by a sensitive detector. A computer can then choose whether to direct the cell by means of an electrical current into a waste well to the left or a collection well to the right. The cells that accumulate in the collection well are removed with a pipette for further study.The advantages of the Caltech team's sorter are that the chip is cheap and disposable, and that the system does not produce an aerosol of cells, as do other sorters. The fact that the system is self-contained makes the Caltech sorter particularly suitable for hazardous biological materials.

Optical micrographs of the microFACS device. The device shown has channels that are 100 micrometers wide at the wells, narrowing to 3 micrometers at the sorting junction. The channel depth is 4 micrometers, and the wells are 2 mm in diameter.

In addition to Quake, the others involved in the work are Anne Y. Fu, a graduate student in chemistry who is lead author of the Nature Biotechnology paper; Frances H. Arnold, a professor of chemical engineering and biochemistry; Axel Scherer, a professor of electrical engineering, applied physics, and physics; and Charles Spence, a graduate student in applied physics.

The work was supported in part by the U.S. Army Research Office and the National Science Foundation. In addition to the sorter, Mycometrix has also licensed Quake's DNA sizing technology, a replacement for gel electrophoresis. 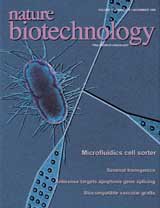 Image of E. Coli superimposed over electron micrograph of cell sorting device (not to scale).

Optical image showing bead sorting in action. A red bead is being sorted to the collection channel.

Optical micrographs of the microFACS device. The device shown has channels that are 100 micrometers wide at the wells, narrowing to 3 micrometers at the sorting junction. The channel depth is 4 micrometers, and the wells are 2 mm in diameter.
Image Lightbox
Subscribe
The Caltech Weekly