PASADENA— Egypt has issued two postal stamps with the likeness of Ahmed Zewail, the Linus Pauling Professor of Chemical Physics and professor of physics at the California Institute of Technology. The stamps were issued in tribute to Zewail's scientific achievements. He was honored at a June 14 ceremony in Cairo, Egypt.

"I am particularly pleased as this honor comes from my country of birth and that I could be in the company of stamps honoring the pyramids, Tutankhamen, and Queen Nefertiti," said Zewail.

Peter B. Dervan, chair of the Division of Chemistry and Chemical Engineering, remarks that "Zewail's fundamental contributions to molecular science, like the pyramids, will be long lasting."

Zewail is internationally recognized for his development of ultrafast lasers and electrons to probe chemical reactions as they actually occur in real time. Because reactions can take place in a millionth of a billionth of a second, Zewail's research has, with state-of-the-art lasers, made it possible to observe and study for the first time atoms and molecules in motion, probing nature at its fundamental levels.

Specifically, Zewail seeks to understand better the way that chemical bonds form and break. With the development of laser techniques, he and his team have been able to obtain greater insights about the precise nature of chemical bonds. The field, femtochemistry, has had wide-ranging impact on chemistry and biology all over the world.

Born and raised in Egypt, Zewail received both his bachelor's and his master's degrees from Alexandria University. He earned his doctorate from the University of Pennsylvania in 1974 and joined the Caltech faculty in 1976 after two years as an IBM Fellow at the University of California at Berkeley. Dr. Zewail, now a U.S. citizen, is a member of the American Philosophical Society, National Academy of Sciences, American Academy of Arts and Sciences, Third World Academy of Science, and European Academy of Arts, Sciences and Humanities, and he is a Fellow of the American Physical Society.

His international awards include the Benjamin Franklin Prize, the Robert A. Welch Award, the King Faisal Prize, the Wolf Prize, the Carl Zeiss Award, the Leonardo da Vinci Award of Excellence, the Bonner Chemiepreis Award, and the Medal of the Royal Netherlands Academy of Arts and Sciences. Among his national prizes are many from the American Chemical Society, including the Harrison-Howe Award, the Peter Debye Award, the E. Bright Wilson Award, and the Buck-Whitney Award. The American Physical Society has honored Dr. Zewail with the Earle K. Plyler Prize and the Herbert P. Broida Prize. He has also received the Chemical Sciences Award from the National Academy of Sciences. In 1995, the president of Egypt, H. Mubarak, honored Zewail with the Order of Merit, First Class. 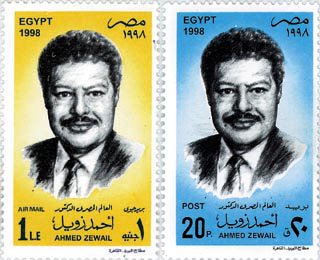